In 2020 and 2021 CMES hosted many wonderful speakers via Zoom. Here you will find videos of a selection of those talks. Please respect that the content of these talks and discussions are the intellectual property of the speakers. 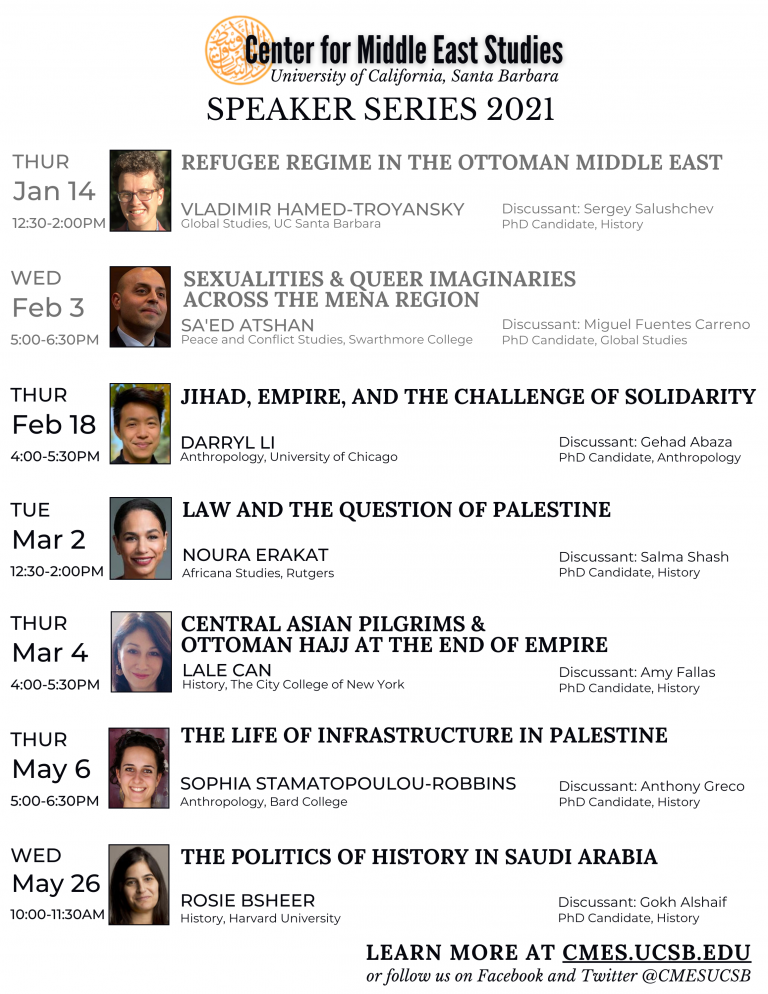 MAHJAR MATTERS
Writing a History of WWI from the Syrian Diaspora

DESCRIPTION: In this talk, Stacy Fahrenthold examines the politics of Syrian and Lebanese migration during the First World War. Some half-million Arab migrants, nearly all still subjects of the Ottoman Empire, lived in a diaspora concentrated in Brazil, Argentina, and the United States. They faced new demands for their political loyalty from Istanbul, which commanded them to resist European colonialism. From the Western hemisphere, Syrian migrants grappled with political suspicion, travel restriction, and outward displays of support for the war against the Ottomans. From these diasporic communities, Syrians used their ethnic associations, commercial networks, and global press to oppose Ottoman rule, collaborating with the Entente powers because they believed this war work would bolster the cause of Syria’s liberation. Based on her new book, Between the Ottomans and the Entente, Fahrenthold discusses how Syrian emigrant communities became a geopolitical frontier between the Young Turk Revolution and the early French Mandate, transforming the diaspora into an epicenter for Arab nationalist politics.

AGE OF COEXISTENCE
The Arab World Before Sectarianism

DESCRIPTION: Today’s headlines paint the Middle East as a collection of war-torn countries and extremist groups consumed by sectarian rage. Professor Makdisi provides a historical perspective to the contemporary sectarian tragedy that is unfolding in the Middle East. He delves into the complex, and now obscured, modern culture of coexistence in a region rich in religious diversity. In particular, Makdisi disputes two narratives that have traditionally dominated the story of diversity in the Middle East. The first stresses a continuous history of latent or actual sectarian strife between allegedly antagonistic religious communities; the second idealizes coexistence and communal harmony between Muslims and non-Muslims.

A Conversation About Culturally-sensitive
and Trauma-informed Therapy

DESCRIPTION: Hala Alyan, a Palestinian-American clinical psychologist who practices in New York, speaks to the importance of a culturally-sensitive and trauma-informed therapy, and answered questions about related care strategies.

DESCRIPTION: Despite the importance of understanding how refugee crises end, little is known about when and why refugees return home. We study the drivers of refugees’ decision-making using original observational and experimental data from a representative sample of 3,003 Syrian refugees in Lebanon. We find that conditions in a refugee’s home country are the primary drivers of return intentions. Refugees’ decisions are influenced primarily by safety and security in their place of origin, their economic prospects, the availability of public services, and their personal networks. Confidence in information is also important, as several drivers of return only impact intentions among people who have high confidence in their information. By contrast, the conditions in hosting countries––so-called “push” factors––play a much smaller role. Even in the face of hostility and poor living conditions, refugees are unlikely to return unless the situation at home improves significantly.